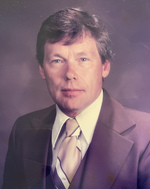 It is with deep sorrow and much love that we mourn the passing of William Louis Sebright of Allegan on April 28th at the age of 81 years.

Bill was born on December 16th, 1939 in Concord, California. He was the son of Bernice (Powell) and Nelson Sebright, “Bea and Mickey”. Bill graduated from Martin High School in 1957 and opened his own fruit stand in Glenn, Michigan. He enlisted in the United States Navy the following year, attending the Great Lakes Naval Academy and serving in the Pacific on the U.S.S. Ticonderoga and the U.S.S. Bennington. His service was always a source of strength as he encouraged many young people over the years to join the Navy. He was a proud member of the VFW. Upon returning home from the sea, Bill married the love of his life Bernadine Nickrent on August 26, 1961. Together they raised three daughters: Linda, Judy and Grace.

If you didn’t join the Navy, you should certainly get a job at Consumers Power Co. (Consumers Energy). Bill was a Compressor Station Operator at Consumers for 32 years in Overisel.

Always a “man of the earth”, Bill, with his wife Bernie and their daughters, planted a garden large enough to feed a small army. Throughout the years he expanded to fruit trees and strawberries. Fruits and vegetables were his vices. In 1992, they opened Granny’s Gardens with their daughter, Linda and her husband Monte. Bill never met a stranger and most enjoyed the people he and Bernie served over the years.

Bill enjoyed many years of hunting, fishing and gardening. He was a loyal Tigers and Lions fan. As a lover of animals, he had many dear pets over the years and was comforted this last year by Rex.

Bill is preceded in death by his parents, his sister Viola Rasnake and grandson Bryan.

A celebration of his life will be held later this summer.