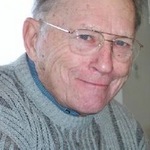 William “Bill” Joseph Ruga, 92, of Allegan, Michigan passed away peacefully at home with his beloved wife by his side, on June 26, 2020. Born June 30, 1927, in Valley Park, Missouri, he was the son of Lazar and Magdalena (Schnur) Ruga and the husband of Irene (de Uriarte) Ruga. Bill attended Sacred Heart Elementary and High School in Valley Park. When Bill was in the ninth grade his family moved to Mineola, MO. so he did not finish high school but later passed the GED. He was drafted into the U.S. Army in 1946 and was honorably discharged after 16 months. He married Irene on September 1, 1951 in Mexico, MO. Bill attended University of Missouri on the GI Bill and graduated in 1954 with a B.S. degree in Agricultural Economics. Education was very important to him and he was very proud of his children and grandchildren for completing college. Upon graduation, he moved to Marion, Ohio and was hired by Central Soya as an assistant manager. In 1958, the family moved to Allegan so he could manage the Handy Electric Feed Mill. Later, he was hired as a salesman by Big Dutchman in Zeeland. After a few years, Bill co-founded Five States Agri Systems, which was a distributorship for Big Dutchman. As the General Manager and President, his office was in Zeeland and he traveled the five-state area until retirement in 1983.

The family has fond memories of fun family time at Bill and Irene’s lake cottage. Bill spent many hours driving the speedboat and teaching his children and grandchildren to waterski. Bill was an avid golfer and spent many weekends golfing with his son, sons-in-law and later his grandsons. He was a member of Cheshire Golf Club for many years and also played in other leagues. He played every Saturday during golfing season and developed many treasured friendships with his golfing buddies. On his 69th birthday, Bill played his best game of golf, scoring a 69 for 18 holes. Bill was a member of the Allegan Elks Club for 48 years and served as the Exalted Ruler from 1988-89. Watching St. Louis Cardinals baseball was a favorite past time. He was also a self-taught electrician and a student of finance. Bill deeply loved his family and always looked forward to family events. He especially enjoyed visiting with his grandchildren and great grandchildren. Bill was a member of Blessed Sacrament Parish since 1958.

Those left to cherish his memory include his wife, Irene of 68 years, his children, Barbara Ruga and Gary Noble of Mesa, AZ, Cynthia and Karl Hermanson of Lapeer, MI, Mary Kay and Robert Young of Auburn, IN, and William N. and Sally (Whitney) Ruga of Allegan, Alfred E. Taylor, son-in-law, of Myrtle Beach, SC, 10 grandchildren and 17 great grandchildren, his brother Lazar Ruga of Rhineland, MO, several nieces, nephews and cousins. Along with his parents, Bill was preceded in death by his beloved daughter Teresa Rose Taylor, brothers, John and Nicholas Ruga, and Delores Ruga, sister-in-law.

The family will receive family and friends at Gorden Funeral Residence, Allegan Chapel on July 2, 2020 from 5-7 pm with Rosary at 6:30 pm. A Mass of Christian Burial will be held at Blessed Sacrament Catholic Church on July 3, 2020 at 11:00 am. Rev. Father Simon Manjooran officiating. In lieu of flowers, donations may be made in Bill’s name to Good Samaritans of Blessed Sacrament or Hospice Care of Southwest Michigan. Interment will take place at Blessed Sacrament Cemetery, Allegan, MI.

Due to the Covid-19 virus, the family requests that social distancing and masks be utilized.