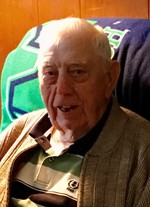 William (Bill) L. Maher, 88, was born Nov. 12, 1931. He was the third child of Will and Ann Maher of Watson. He was raised with his older sister, Patricia, on the farm, working the muck field. Billy, as affectionately known by his ma, walked to country schools in the area until he began 5th grade at Hopkins Public School. He loved sports with basketball being his favorite sport to play. Soon after graduation he met the love of his life, Patricia Lass, through his good friend Doc VanderKolk. June 26, 1954, Bill married Patricia at Sacred Heart, Watson where they preceded to raise all five kids: Brian (Penny) Maher, Sue (Charlie) Wakefield, Jim Maher, Mike Maher, and Beth (John) Johnston.

Bill loved his family with his whole heart. He found his grandkids, Brian, Jake, Adam, Kelli, Aaron, Anna, Truk, JT and Jessica to be the best part of his life. The great grandkids only added to his joy of family. We would be remiss not to mention his dogs as part of the family, especially Barney and Duke.

Bill was a service manager for 32 years and had the reputation across West Michigan as a fair and honest manager to his mechanics and to his customers.

Bill was, and is, 100% Irish. His quick wit and his ability to find the humor in all situations left some perplexed. Dad’s sincere curiosity of life and interest in all people aided one of his greatest pastimes – talking. It has been said that Dad, being Irish as he was, liked his kids and his dogs the same way: a little bit wild, a little bit out of control.

Above all, Bill showed his family how to live: try without fear, give without condition, love without reason.

Bill passed away on Nov. 6th when the hills of Watson were warmed by the afternoon sun. The family would like to note, on dad’s first day in heaven, ND beat Clemson and Biden became president.

A private Mass of Christian Burial will be Nov. 24, 2020 at Sacred Heart, Watson. Memorial contributions can be made out to Sacred Heart Catholic Parish.