To share your memory on the wall of Robert Thomas, sign in using one of the following options:

The family will receive friends on Wednesday, June 5, 2019 from 6:00 PM until 8:00 PM at Gorden Funeral Residence, Allegan Chapel. A funeral service will take place Thursday, June 6, 2019 at 11:00 AM at the funeral home with visitation for one-hour prior. Burial will follow in Poplar Hill Cemetery with military honors by the United States Marine Corps and the Otsego VFW Post 3030. Memorial donations may be made to Wings of Hope Hospice, 530 Linn Street, Allegan, MI 49010.
Read Less

JR Automation purchased flowers for the family of Robert Thomas.

Posted Jun 04, 2019 at 03:01pm
I met Bob at the Allegan Jail when he became head Chaplain and I worked under him. He truly had a heart for the spiritual well being of the inmates. He was a really good listener and had a wonderful dry sense of humor. He would come early in the morning around 7 am to join the inmates in the secured area outside, to breath fresh air with them. Many times he would stay late, usual end of day was 4 or 5 pm, he would stay beyond that to talk. He was a good reference for me in spiritual matters and in personal matters, as both of us had experienced our first wives' death. My sincere condolences to his family. May God's peace that passes understanding be yours as you contemplate his faith in his forever Savior. Alan Davis
Comment Share
Share via:
CQ

Your Augusta Johnnys Family purchased flowers for the family of Robert Thomas.

Posted Jun 04, 2019 at 10:00am
Rest well Bob, you have earned it. You were a good and faithful servant.
Really enjoyed seeing the work you did in your jail ministry. May the "God pod" rejoice in your labor!
Tony Shumaker
Comment Share
Share via: 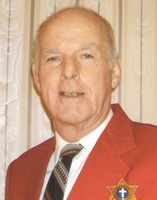