To share your memory on the wall of Robert Fernau, sign in using one of the following options:

In the 50s, Bob served in the US Navy as a radio operator in the S. Pacific. After the Navy, he continued to enjoy traveling and communicating with people all over the world via ham radio (W8NDG).

In May 1962, Bob married Cynthia (Johnston), raising 4 children in Stevensville. As an electrical engineer for Heath Co, he designed the first kit microwave oven and many other projects, some that were featured in the Smithsonian.

A self-taught musician, Bob became proficient on the accordion. Playing Slovenian-style polka & waltz favorites, he entertained Midwest polka fans with his bands, the Polkatones and the Bob Fernau Band. Bob also had the pleasure of playing with Frankie Yankovic when Frank was touring the Great Lakes region.

Bob was an amazing storyteller, spinning tall tales that to this day are legendary amongst his grandchildren. He will be most remembered for his role of Dad and Papa.

A Celebration of Life service will be held Sunday, Nov 24, 2019 at the DANK in Benton Harbor. Visitation is from 2-3pm with a service at 3pm. Funeral arrangements and cremation have been lovingly handled by grandson Samuel Wallace and Gorden's Funeral Home of Allegan. In lieu of flowers, memorial donations can be made to Blue Star Mothers Chapter #177 or Hospice at Home.
Read Less

To send flowers to the family or plant a tree in memory of Robert Durwood "Bob" Fernau, please visit our Heartfelt Sympathies Store.

Receive notifications about information and event scheduling for Robert 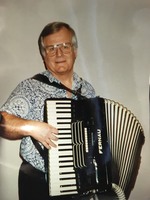