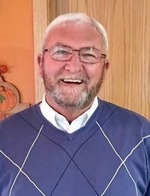 Michael “Mick” Emerson Francis, 72 of Hopkins, Michigan, passed away Friday, October 30, 2020 at Spectrum Health Butterworth Hospital in Grand Rapids, Michigan. Born July 28, 1948 in Alpena, Michigan, he was the son of the late Reuben and Maureen (Emerson) Francis and the husband of Lynn (Gildersleeve) Francis. Education and sports were both very important to Mick and he had a true passion for teaching children, along with making sure they knew how to give back to others. He spent 47 years coaching football and 30 years coaching softball at Hopkins High School and was instrumental in building the softball field there. Mick also taught driver’s training, probably teaching about two-thirds of Hopkins residents how to drive! Since he was already coaching football and softball, Mick decided that he might as well coach volleyball too. The end of Mick’s teaching career was spent on the young elementary children, teaching physical education. In previous years he taught middle and high school social studies and physical education. He passed his love of teaching and coaching on to his sons who have continued his legacy. Mick was living proof of what a dedicated teacher and coach looked like and continued assisting the schools through the Hopkins Booster Club and the Hopkins Area Education Foundation. Giving seemed to be in his blood. Not only was he devoted to education and sports for our youth, but he was also a faithful member of Sacred Heart Catholic Church. Mick had a knack for helping others and always being there for those in need. Those in his community called him a “Legend.” The world has truly lost a generous soul.

Mick is survived by his loving wife, Lynn; their children, Brad (Alexia) Francis and Cody (Traci) Francis; his four grandchildren, Kellan Francis, Evan Francis, Lincoln Francis and Rowen Francis; his sister, Patricia Keller; and many nieces and nephews. Along with his parents, he is preceded in death by his siblings, Marlene Robertson and James Francis; and his brothers-in-law, Raymond Keller and Cory Gildersleeve.

Private services will take place at this time, but a Celebration of Life will be planned for a later date. Memorial donations may be made in Mick’s name to Hopkins High School for the Football / Softball Teams, 333 Clark St., Hopkins, MI 49328 or Sacred Heart Catholic Church, 2036 20th St., Allegan, MI 49010.