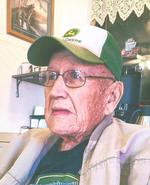 Pudge was preceded in death by two wives, Elaine and Betty; his parents, Elmer and Audrey Wedge; and two brothers and their spouses, Doran and June Wedge and Karlton and Lois Wedge.

Pudge prided himself in driving to breakfast every day to the Northwoods Inn located in Pullman until two months ago when he no longer had the energy to walk to his garage to get his truck out for the drive. He was quite proud of the fact that he only took one medication and many of the restaurant community who were somewhat younger than him often took many more.

Pudge enjoyed sitting in his garage with the door open and watching traffic go by waving at everyone. He loved antique cars and owned several himself.

Through his life, Pudge was a farmer, a mechanic, a business owner, and worked for Milbocker and Sons hauling heavy equipment until his retirement. After retirement, Pudge was known for doing many other odd jobs that would come along. He was known as a “fix it” guy and could fix just about anything that was broken, especially if it had a motor on it.

Pudge served proudly in the United States Navy on a rocket ship LSM(R) 198, of which there were only 18 ships in this class. Each ship was equipped with a 5” gun and 70 rocket launchers. He would tell stories of how when the 5” gun was shot, that the ship would move 100 yards out to sea. After a couple of shots, they would have to reposition the ship toward shore to fire again.

A Celebration of Life is being planned for the spring of 2021.