To share your memory on the wall of Lawrence Montgomery, sign in using one of the following options:

Print
Lawrence Earl Montgomery, 65, of Allegan, passed away on December 8, 2019 at his home after fighting a battle with cancer.

He was born on December 25, 1953, in Indiana to the late Monty and Dolly (Gordon) Montgomery.

His fam... Read More
Lawrence Earl Montgomery, 65, of Allegan, passed away on December 8, 2019 at his home after fighting a battle with cancer.

He was born on December 25, 1953, in Indiana to the late Monty and Dolly (Gordon) Montgomery.

His family moved to Michigan in the 70’s. Larry graduated from Fennville High School.

Larry worked in auto manufacturing for over 40 years. He was employed at General Electric, Magna/Donnelly, American Auto Coat, and Lacks Enterprise. He worked in project maintenance and paint processing. His areas were electrician, robotics, automation and technology.

In his spare time, he enjoyed reading, golfing and camping at Sandy Pines. He also built up the family farm at Millgrove Greenhouses.

Larry was devoted to his wife of 36 years. On March 3, 1984, in Allegan he married Vicki Vondrash/Emelander, who survives.

Larry was always there for his family and he will be deeply missed.

The family will receive friends at Gorden Funeral Residence, Allegan Chapel, on Thursday, December 12, 2019 from 4:00 PM until 7:00 PM. Refreshments will be served. A memorial service will begin at 7:00 PM.

Memorial donations may be made to the family.
Read Less

To send flowers to the family or plant a tree in memory of Lawrence Earl "Larry" Montgomery, please visit our Heartfelt Sympathies Store.

Receive notifications about information and event scheduling for Lawrence

We encourage you to share your most beloved memories of Lawrence here, so that the family and other loved ones can always see it. You can upload cherished photographs, or share your favorite stories, and can even comment on those shared by others.

Posted Dec 11, 2019 at 04:49pm
Larry was a dear friend for many years, happy we got to see Larry, he will truly be missed. David & Holly Thomas
Comment Share
Share via:
HS

Posted Dec 11, 2019 at 04:01pm
Your Vicci, You are in our thoughts and prayers
From David and Holly Thomas, Angela and John Snyder, Gladys Kincaid

Flowers were purchased for the family of Lawrence Montgomery. Send Flowers

Flowers were purchased for the family of Lawrence Montgomery. Send Flowers 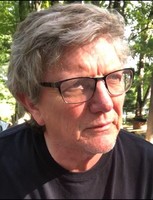