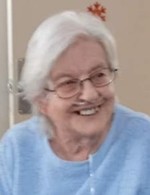 Joyce Marie Kolbeck, 88, of Allegan, MI passed away Sunday, August 11, 2019 at Ely Manor. Born December 1, 1930 in Otsego, she was the daughter of the late Leonard Persley and Hazel (VanHouten) Brown and was the wife of the late Eugene Arthur Meade and Alois Kolbeck. When she was not tending to the variety of animals on her mini hobby farm, she enjoyed spending time crocheting.

Along with her parents and her husbands, she was preceded in death by her son, Wayne Meade; and her siblings, Jean Blair, Bernie Brown, Ray Brown and June McEwen.

The family will receive friends on Wednesday, August 14, 2019 from 10:00 AM until 11:00 AM at which time a funeral service will begin. Burial will follow in Hicks Cemetery, Watson Township. Gorden Funeral Residence, Allegan Chapel, is assisting the family with arrangements.