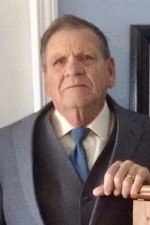 Jerry Wayne Daniel of Wayland, Michigan, died at his home on February 4, 2020 after a brief and difficult struggle with non-Hodgkin’s lymphoma. He was born July 9, 1938 in Hughey, Tennessee to Clarence (George) and Mary Will Weir Daniel. Jerry Wayne was a graduate of Flintville High School class of 1956. While still in high school, he joined the National Guard and later served in the reserves at Fort Bragg, NC. He attended Draughons School of Business in Nashville, TN and managed stations for Esso Oil. In 1959, he married Sandra Huffines with whom he raised three children. The family moved to Warren, Michigan where he was a tool maker and soccer coach. His boys team won the AYSO state championship in 1977. In 1999, he married Rev. Reva Wykes Hawke. After retirement, he became a security guard at Sandy Pines Resort and Checker Motors.

Jerry Wayne is survived by his wife, Reva; his daughters, Tina (Thomas) Judd and Tonya (Steve) Melnyk; his son, Todd W. Daniel (significant other, Sandy Franklin); and their mother, Sandra Daniel. He leaves eight grandchildren, Julienne' (John) McPherson, Kyle (Sarah) Dodd, Nicole, Nicholas, Grace and Madison Daniel and Christian and Shane Casacchia; and a great-grandchild, Seraphina Sandra McPherson. He is also survived by his wife's children, Andrew S. (Teresa) Hawke, Rebecca Heath and Lucinda (Harry) Tucker; her eleven grandchildren, including Andrew J. Hawke whom he helped raise; and her 13 great-grandchildren. He was preceded in death by his parents; his son-in-law, Jerry W. Dodd; and his wife's son, Dennis M. Hawke.

A Celebration of Life will be held Saturday, February 8 at Hopkins United Methodist Church, 322 W. Maple, Hopkins, beginning with a luncheon at noon followed by a celebration service at 2:00 PM. Burial will take place at a later date in Flintville, TN. The family suggests that memorial contributions be directed to Boys Town, 14100 Crawford Street, Boys Town, NE 68010 (www.boystown.org); or a charity of your choice.