To share your memory on the wall of James Gabala, sign in using one of the following options:

Jim had a 30 year career building custom homes throughout the area before joining Lakewood Inc. in Holland from which he enjoyed a long retirement. Jim never met an open road that he didn’t like and boasted that he drove through nearly all 50 states. His favorite trip was any one that put him in his Corvette with Lois by his side. He felt most at home in his recliner, ice cream in hand, cat on his lap, which he claimed he didn’t like.

He was preceded in death by an infant daughter, brother-in-law, James Betts and sister-in-law, Marilyn Gabala.

Jim’s greatest gift to his family was 30 years of sobriety. His courage and strength is admirable. As a note, the family would like anyone who’s suffering to know: Sobriety is possible, lasting and rewarding. Hearts and families can heal.

Friends may meet with the family at the Gorden Funeral Residence, Hopkins Chapel, on Friday, June 28, 2019 from 5:00 PM to 7:00 PM where the funeral service will be held on Saturday, June 29, 2019 at 11:00 AM. Burial to take place at Poplar Hill Cemetery, Monterey Township. Gorden Funeral Residence, Hopkins Chapel, is assisting the family with arrangements.
Read Less

We encourage you to share your most beloved memories of James here, so that the family and other loved ones can always see it. You can upload cherished photographs, or share your favorite stories, and can even comment on those shared by others.

Posted Jun 28, 2019 at 09:26pm
I haven’t know Jim for a long time but when I would see him every couple of weeks he touched my heart. He’d share experiences from his life which I enjoyed hearing.
I had shared my experience of hitting the side of the garage door frame & ripping the passenger mirror right off the truck. I told him I had gone to the Ram garage and was told it would cost $650 to replace it. So, unbeknownst to me Jim had gone down to the local garage in Hopkins & made arrangements for me to get the part at cost plus labor. Only a fraction of the cost. I was so amazed he had done that for me. After that he’d tease me, asking how the mirror was doing? Had I hit the garage lately? No Jim, the mirror & garage are good!!! 😀 Both he & Lois have a special place in my heart.
Comment Share
Share via:
HS

Flowers were purchased for the family of James Gabala.

Posted Jun 26, 2019 at 02:02pm
Please accept our most heartfelt sympathies for your loss... Our thoughts are with you and your family during this difficult time.

Vivid Recollections was purchased for the family of James Gabala. 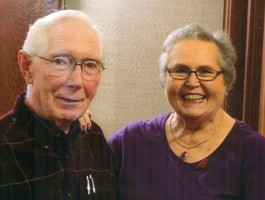