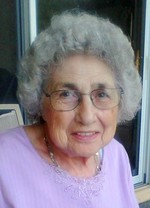 Irma Irene Wamhoff passed away at age 97 on Sunday September 20, 2020. Irma was born in Krem, ND to Edward and Amalia Oster. She grew up helping on the family farm and often told of times she drove horses, once as many as six at a time. She often took her siblings to school in a sleigh or buggy. Irma moved with her family to Hopkins, Michigan when she was a teenager. She worked as a housekeeper and nanny, at Weick’s grocery store and at JCPenney’s in Allegan as a salesperson and window dresser. Irma married the love of her life, Raymond Wamhoff, on June 16, 1950. She worked tirelessly as a partner with Ray in the dairy farm business and homemaker raising her children, Daniel, Kathleen, Charles, Timothy and Jayne.

Irma always had a funny story to tell, a joke or some sage advice to offer. She would often say “To each his own said the old lady as she kissed the cow” or when worrying about the cleanliness of your house she would say “No one should look for their cow there” then add “It always sounds better in German.”

The family will receive friends at the family farm (2080 130th Ave., Hopkins, MI 49328) on Saturday, September 26, 2020 from 10:00 AM until 12:00 PM at which time a funeral service will begin. Burial will follow in Maplewood Cemetery, Hopkins Township. Gorden Funeral Residence, Hopkins Chapel, is assisting the family with arrangements.