To share your memory on the wall of Charles \"Chuck\" Hopkins, sign in using one of the following options:

Chuck honorably served his country in the United States Air Force for four years while stationed at Kincheloe Air Force Base, MI during the Vietnam War. He retired from Consumers Energy in 2001 as a Crew Leader in the Forestry Department after thirty-one years of dedicated service. He was honored with a Community Volunteer Service Award by Consumers Energy for his commitment of time and service to the residents of Sunset House (a local group home for mentally and physically impaired men) here in Allegan. During this period of time Chuck was instrumental in the creation and funding of a greenhouse on the Sunset House grounds that provided training for the men in planting, nurturing and selling flowers to those in the community.

Chuck was also actively involved in his church at Immanuel Lutheran and served, along with his wife, as Youth Group Leaders and Sunday School teacher for those who were mentally challenged. He also served as a member of the Church Council for several years. He volunteered also as a coach for Rocket Football and was one of the biggest cheerleaders for the Allegan Summer Tennis Program. He took great pride in his gardening projects and was a very talented woodworker, who joyfully shared his creations with both family members and close friends. In recent years he designed and carved special crosses that were given to his family members as well as members of a friend's family upon the death of a loved one. But his greatest joy was with his children and grandchildren. He was their greatest supporter and “life coach” in every aspect of their lives and will be greatly missed.

Chuck is survived by his wife Pam, sister Nancy (Chris) Thomas of Henderson, Nevada, daughter Debra (Kevin) O'Leary, of Byron Center; son Jeff (Angel) Hopkins of Allegan; granddaughters Alyssa, Bridgett, Laney and Harper Hopkins and Kara (C.J.) Wyman of Hickory Corners, as well as grandson Ryan O'Leary of Kalamazoo and grandson-to-be through marriage Keith Southwick, also of Allegan. He also leaves behind to cherish his memory his great-grandchildren Miah, Sloan, Liam and Connor, along with several nieces and nephews. He was preceded in death by his parents, brothers Bill, Bob and Don, daughter-in-law Lisa, mother and father-in-law Norman and Lorena Lambert and brother-in-law Larry Clark.

A private Memorial Service for family will be held at Immanuel Lutheran Church on Saturday, July 18th, followed by a Celebration of Life for family and close friends at The Silo.

Memorial donations in Chuck's name may be given to Wings of Hope Hospice, Sunset House or the Allegan County Food Pantry.
Read Less

To send flowers to the family or plant a tree in memory of Charles "Chuck" Elliott Hopkins, please visit our Heartfelt Sympathies Store.

Receive notifications about information and event scheduling for Charles "Chuck"

We encourage you to share your most beloved memories of Charles "Chuck" here, so that the family and other loved ones can always see it. You can upload cherished photographs, or share your favorite stories, and can even comment on those shared by others.

Posted Jun 01, 2020 at 03:50pm
I am so sad to hear of Chucks passing. He was very loved by the Brower family and will surely be missed. He was one of the kindest human beings in this world. Sending my love to you all and keeping ou close in prayer.
Comment Share
Share via:
SM

Posted Jun 01, 2020 at 03:48pm
I cannot express my heartfelt sympathy. Chuck was one of a kind. He was such a good friend to my dad Marv and our family. He was one of the kindest human beings in this world. He will surely be missed. Keeping you all close I love and prayer.

Posted May 20, 2020 at 05:22pm
I knew Chuck as Chucky Baby. As a child growing up watching my sister Pam fall in love with her high school sweetheart I knew he was a very special young man. He became the big brother and the only brother God blessed me with. He teased me a lot and I came to release that we were kindred spirits. I thank God for so many laughs and cries and beautiful memories of a special brother that was one in a million. I look forward to the day when I see you again in heaven. Till that day celebrate with Jesus and tell all our family I will see you all again one day.
Comment Share
Share via:
A

Posted May 20, 2020 at 12:25pm
I will remember chuck always. With his short stay at Allegan county rehab. Chuck always had a smile in his face. Never a cross word. He likes to give me a run for my money with quick wit and snappy comebacks. When the day was over he never failed to say thank you and always offered a hug. I thought of chuck as a grandpa since I never knew my grandpa’s. Many prayers and hugs for his wife and his family. I cherished the little time I spent with chuck and felt like I knew him my whole life
Comment Share
Share via: 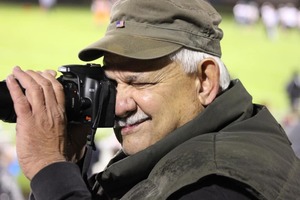