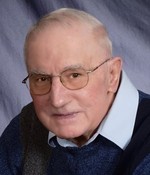 Carl Francis Johnson, Sr., 96 of Allegan, MI passed away Wednesday, February 26, 2020 at Allegan General Hospital. Born November 2, 1923 in Lawrence, Michigan, he was the son of the late Roe and Margie (Utter) Johnson and the husband of Marjorie (Dyer) Johnson. Mr. Johnson was a proud veteran of the United States Army. He served honorably during World War II; specifically during the invasion of North Africa and the invasion of Southern France. His career with Rockwell International, formerly Blood Brothers, spanned forty-three years prior to retirement. Mr. Johnson also loved to tend to the family farm in Watson Township. He was a former member of the Hopkins Public School Board and served on the Board of Directors for Rockwell Public Credit Union and was instrumental in establishing Allegan Community Credit Union. Mr. Johnson was a longtime member of Allegan Bible Church where he was a member of the Board of Directors and helped to build the new church in the location where it is today. He was a loving and dedicated husband, father, grandfather, great-grandfather and friend to many.

The family will receive friends at Gorden Funeral Residence, Allegan Chapel, on Sunday, March 1, 2020 from 6:00 PM until 8:00 PM. A funeral service will be held at Allegan Bible Church on Monday, March 2, 2020 at 11:00 AM. Private interment will take place at Miner Cemetery, Watson Township. Memorial contributions may be made to Allegan Bible Church, 412 Sherman Street, Allegan, MI 49010.