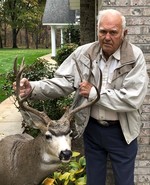 Bernard J. “Buster” Milbocker, of Allegan, Michigan, passed away at his home peacefully on February 5, 2020. He was born in Gaylord, Michigan on December 27, 1931, eldest son of the late Sylvester and Margaret (Pack) Milbocker. Buster spent most of his childhood in northern Michigan before moving to the Chicora area in the late 1940’s. Buster was an honored Marine serving during the Korean Conflict, earning the Purple Heart by being wounded in battle shortly after his 21st birthday on New Year’s Day in 1953. After the war he went to work for Pickett and Schurer in 1954 where he began seven decades in the construction industry. Buster met Colleen and they were married in 1955. It was around this same time that Buster’s father started his own business which eventually became, Milbocker & Sons, and worked alongside his father and brothers throughout the State of Michigan. Buster enjoyed the outdoors, spending many hours of his life hunting and fishing, taking many trips with family and friends across the country and Canada. Buster and Colleen spent 44 years together raising a family and traveling. After Colleen’s death, Buster married Vera Melvin, and they spent many happy years together, enjoying family and friends. Buster was a tremendously hard-working man, always a gentleman, and a truly wonderful husband, father, grandfather, great grandfather, brother, uncle and friend.

Cremation will take place with a private interment in Hudson Corner’s cemetery. The family will receive family and friends at a later date and location to be determined. In lieu of flowers the family wishes donations be made to The Wings Home, 530 Linn Street, Allegan, MI 49010; or Camp Kidwell, 39000 1st Avenue, Bloomingdale, MI 49026.