To share your memory on the wall of Bernard Milbocker, sign in using one of the following options:

Cremation will take place with a private interment in Hudson Corner’s cemetery. The family will receive family and friends at a later date and location to be determined. In lieu of flowers the family wishes donations be made to The Wings Home, 530 Linn Street, Allegan, MI 49010; or Camp Kidwell, 39000 1st Avenue, Bloomingdale, MI 49026.
Read Less

To send flowers to the family or plant a tree in memory of Bernard Joseph "Buster" Milbocker, please visit our Heartfelt Sympathies Store.

Receive notifications about information and event scheduling for Bernard

There are no events scheduled. You can still show your support by sending flowers directly to the family, or planting a memorial tree in memory of Bernard Joseph "Buster" Milbocker.
Visit the Heartfelt Sympathies Store

We encourage you to share your most beloved memories of Bernard here, so that the family and other loved ones can always see it. You can upload cherished photographs, or share your favorite stories, and can even comment on those shared by others.

Philip and Christena Wichowsky and Shelly Surette sent flowers to the family of Bernard Joseph "Buster" Milbocker.
Show you care by sending flowers

Posted Feb 16, 2020 at 12:01am
I remember how much love and support that Buster and Colleen gave me as a teenager. I have so many special moments and memories to count. What a special man this earthly world has lost but forever in many thoughts and hearts. So much love given to the Milbocker family.
Comment Share
Share via:
DB

Posted Feb 14, 2020 at 08:36pm
I will always remember the great times with the Milbocker family in River View Park. Buster and Colleen were always so kiind to me and so welcoming. Very sorry to hear of Buster's passing. He was a gentle giant to this little kid. Hugs to Steven, Kathy, Susie and Scott.
Comment Share
Share via:
PK

Posted Feb 10, 2020 at 09:40pm
You could search the world over and never find a better friend or man, he was a friend for over sixty years and when you seen him he always had that impish grin and a big hug waiting for you. He will create a huge void in many lives that no one else can ever fill. To the whole family you are in my thoughts and prayers, God bless you.

Posted Feb 07, 2020 at 05:08pm
Buster was a great man you knew what kind of man he was the minute you met him kind caring loving happy .He always had a hug and a smile for you when he saw you . I never heard a bad thing said about anyone from Buster He will be missed by many and his family will be lost without him He is with Colleen and smiling down on all of you. Keep your memories close and he will always be in your heart. God bless you all. Your in my thoughts and prayers
Jackie Thompson
Comment Share
Share via:
PM

Posted Feb 06, 2020 at 07:16pm
Just thinking of his fine character and how much fun he was. Always great to be around. My heart goes out to the family.
Love, Pat Miner 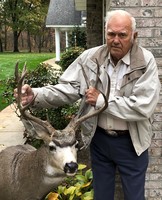 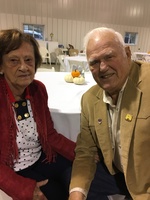