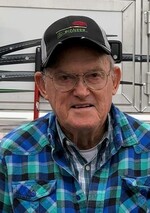 Basil Eugene Smith, 93, of Allegan, MI passed away Sunday, December 27, 2020 at Wings Home. Born May 7, 1927 in Allegan Township, he was the son of the late Eugene and Amy (Allen) Smith. Basil met the love of his life, Henrietta Alice Holthof, as a young man and they wed on August 27, 1949. This year they celebrated seventy-one years of marriage. In 1950 Basil and Henrietta purchased the farm where they have lived ever since. He had attended the Jewett School, Miner Lake School and then Allegan High School where he had driven a friend’s Model T to school from time to time prior to graduation in 1944. As a young boy, Basil helped to build the fence around the POW Camp on Lake Allegan. He was a well-known farmer in the area and was proud of his registered Holstein herd. He retired from milking cows at the age of sixty-two and then continued to raise young cattle in addition to cash cropping, even prepping a field as recently as 2019. Basil’s children and grandchildren showed many of his home raised dairy heifers over the years. He was a 4-H Dairy Leader and served on the Allegan County Farm Service Agency for twenty years. In 1976 Basil was honored to be named Dairyman of the Year by the Allegan County DHIA and had received many awards over the years for high-producing milking cows. He had attended Michigan State University and did artificial breeding for twenty-two years. Basil had been to the Allegan County Fair every year until this year when it was canceled due to the pandemic. As a child, his family would go by horse and buggy with a packed lunch. He had been a trustee for Allegan Township for sixteen years and served on the Allegan Township Planning Commission. Basil also worked for ten years driving cars for West Michigan Auto Auction. When time permitted, he also enjoyed going snowmobiling and was a member of the Allegan Snowmobile Club. Basil and Henrietta were longtime members of The First Reformed Church. Even with all of his accomplishments, he remained a quiet, humble man. He was a hardworking, loving husband, father, grandfather and great-grandfather whose greatest joy came from spending time with those he loved.

Due to recent regulations, Basil will be laid to rest privately in Hudson Corners Cemetery. A Celebration of Life is being planned for Spring 2021 and those details will be announced once finalized. In lieu of flowers, memorial donations to Wings of Hope Hospice and Wings Home, 530 Linn Street, Allegan, MI 49010 are suggested. Gorden Funeral Residence, Allegan Chapel, is assisting the family.