To share your memory on the wall of Arlene Hill, sign in using one of the following options:

Arlene was a gifted pianist and shared her love of music with her many private piano students. She also taught elementary music and directed choirs in schools in Davenport, Iowa, and East Grand Rapids, Michigan. In later years, she enjoyed playing duets with her friend Nan for their music club. She was a talented cook who enjoyed making and sharing meals with her family and friends. She operated a muffin business in Detroit, Michigan, that sold muffins at many small grocery stores and also worked as a customer service representative for a medical supply company in St. Clair Shores, Michigan.

Throughout her life, Arlene was an active member of Lutheran congregations in Minnesota, Iowa, and Michigan, teaching Sunday School and VBS, playing piano and organ, singing in the choir, and sharing her talents in other ways. She also volunteered her service to many community organizations, including Hurley Medical Center in Flint, Michigan, where she coordinated a pediatric activity program, and Lutheran Social Services of Michigan, which honored her as volunteer of the year in 2000.

Arlene and Rod loved to travel and camping was a favorite family summer activity. As a couple, they traveled to Australia, New Zealand, China, Scandinavia, and throughout Europe and the United States. They especially enjoyed visits to Ohio and Minnesota to visit their children and grandchildren.

Arlene is survived by her husband of nearly sixty-one years, Rodney, and their children, Grier and Sue Ann Hill and Marla (Hill) and Jon Holt, and their families, including Nicole Hill and Paul Popovski; Joseph and Megan Vaughn, Allison and Joseph; Stephanie and Nate McDonough; and Evan Holt and Julia Holt. She was preceded in death by her parents; her sister and brother-in-law, Elaine and James Mortensen; her brother Donald; her father- and mother-in-law, Elmer and Alice Hill; and her brother-in-law Clifford Fashant.

Her cremains will be interred in the memorial garden of Peace Evangelical Lutheran Church, South Haven, Michigan. A hymn sing funeral will be celebrated later when larger gatherings and full-throated singing are permissible.

To send flowers to the family or plant a tree in memory of Arlene Bernadine Hill (Selander), please visit our Heartfelt Sympathies Store.

Receive notifications about information and event scheduling for Arlene

We encourage you to share your most beloved memories of Arlene here, so that the family and other loved ones can always see it. You can upload cherished photographs, or share your favorite stories, and can even comment on those shared by others.

Flowers were purchased for the family of Arlene Hill. Send Flowers 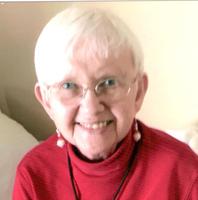